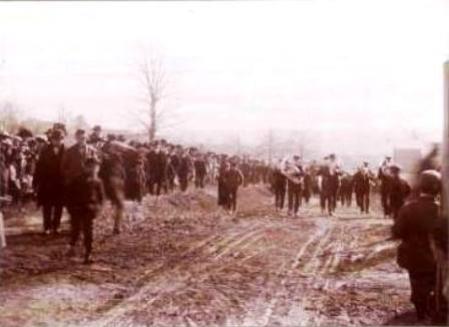 We are a 100% volunteer run and  staffed organization and are funded entirely by membership fees and donations. Please join. Please donate. 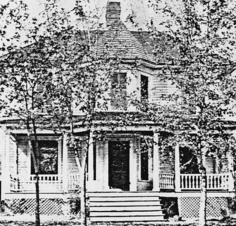 Longstreet's funeral procession on a muddy road in Gainesville

​​​Welcome to ​​​​The Longstreet Society

The Piedmont Hotel -  In its heyday, the Piedmont hotel was an imposing three story building with 36 rooms in two wings joined by a connecting structure which contained the stairwells and the lobby and ballroom. General James Longstreet, commander of the famous old Confederate First Corps and Robert E. Lee's second in command and closest confidant, opened the hotel on June 13, 1876.  Today only the ground floor of the north wing remains and contains a library, museum room, meeting room, and the Woodrow Wilson room (his daughter Jesse was born here).

​The Home Site - Shortly after moving to Gainesville in 1875, the General bought a 160 acre farm here and built his home on it. He raised muscadines, which are a domestic grape, and turkeys and sheep. The farm became his sanctuary and he was often seen there tending to his vines. In 1889 the home burned and his first wife Maria Louisa Garland Longstreet died of illness a few months later. Today the site is graced by a handsome standing statue of the General by sculptor Gregory Johnson , placed by the General James Longstreet Chapter, United Daughters of the Confederacy and funded by the Denton Hadaway estate.  See at 959 Longstreet Circle

The Helen Longstreet Home - The General lived here with his second wife, Helen Dortch Longstreet until his death. Helen had a chapel built in the basement and Gainesville's first Catholic Church, Saint Michael's, held their first services there. There is still a very active Saint Michael's Catholic Church in Gainesville at a difference location. This house is now privately owned and houses a local business. There is no parking on the street. It is best observed with a drive-by look only. See at 746 Green Street

​​The Death Site - The home of the General's daughter, Maria Louisa Longstreet Whelchel and her husband Eston was located on College Avenue. General Longstreet was suffering from cancer of the eye, but rallied the morning of January 2, 1904 and asked to be driven to his daughter's home. Once there his condition worsened and he developed pneumonia. During a coughing spasm the neck wound from the Wilderness campaign opened and he bled to death. A newspaper reported, 'the old General died of his wounds." Now a lot at 255 College Avenue between Bradford Street and E. E. Butler Parkway.

Roosevelt Square - The site of the old Hall County Courthouse where General Longstreet's viewing and funeral were held in 1904. The funeral was the largest funeral ever seen in Hall County and closed Gainesville down for several days. The railroad arranged for special trains to accommodate the throngs of people who wished to attend and from here the General's body took part in a procession to Alta Vista Cemetery. This building was destroyed by the tornado of 1936, but there is a Georgia historical marker at the site. See in the square behind 300 Henry Ward Way.

​The Grave Site - The general chose "good ground" similar to that of the Union position at Gettysburg for his family burial plot in Alta Vista Cemetery. He was buried here in 1904 and even today a steady stream of admirers come to pay their respects and to bring the general flags and cigars and other tokens of esteem. See at 1080 Jesse Jewell Parkway. Go to the flagpole in the center of the cemetery.