We are a 100% volunteer run and  staffed organization and are funded entirely by membership fees and donations. Please join. Please donate.

​​​Welcome to ​​​​The Longstreet Society

​In Richmond, VA during winter 1862, the three youngest children of General James and Maria
Louisa Longstreet died from scarlet fever. This personal tragedy is mentioned in biographies
and discussions of Longstreet the General. However events that happened, or did not happen
in regards to little Mary Ann, James Jr. and Augustus Baldwin Longstreet following their deaths
seem vague and troubled.  For many decades it was believed that in those dark hours James and Louise were too distraught to see to the children’s funeral arrangements, or even attend the services. Longstreet’s friend Brigadier General George Pickett, who was in Richmond at the time with 16 year-old LaSalle Corbell, intervened. It was George and Sally (soon to be the third Mrs. George Pickett) who took care of all arrangements and attended for the grief-stricken parents. However, this long established tale rings false for some Longstreet scholars, especially since the only source for its authenticity is contained within a letter of condolence written by LaSalle herself to Longstreet’s  second wife, Helen, upon the General’s passing on January 4, 1904.

Cavalier Tales
After Pickett’s death in 1875 LaSalle began to write and lecture about her famous husband. Her tales of Pickett and the times he lived in were highly romanticized and unfortunately, also suspect in terms of their truthfulness. In the introductory pages of her biographical work, “General George E. Pickett in Life and Legend”, Lesley J. Gordon describes the difficulty of separating fact from fiction when attempting to study Pickett’s life, due to the writings of LaSalle. “Civil War historians have tried to tell George Pickett’s story without LaSalle and found it immensely difficult…Her fabricated and romanticized tales have become accepted parts of not only the Pickett legend but also Civil War canon,” Gordon bemoans, noting that famous Civil War historian Gary Gallagher “denounced her (LaSalle) not only as author of the published George Pickett letters but also plagiarizer of Walter Harrison’s history of Pickett’s division.” According to Gordon, LaSalle Pickett wrote at a time when “Public memory of the antebellum South and the Civil War focused on noble causes and honorable actions…” It would seem possible that her account of the Longstreets and their children’s death’s fit into this thought process. LaSalle’s exact words to Helen Longstreet, as taken from “Lee and Longstreet at High Tide” were: “My love and sympathy go out to the dear children whose mother was my beloved friend, whom I have held in my arms in childhood, and whose little brothers and sisters faded away before my loving eyes when their flower of life had not yet unfolded from the bud of their sweet infancy and the mortal casket was entrusted to General Pickett and myself to be laid away among the church-yard lilies when the jewel of the pure soul had been taken beyond.” If LaSalle’s words are to be regarded as something more romantic than actual, what did happen following the children’s deaths?

Dearth of Information
From the Richmond Daily Dispatch on January 27 - “In this city, on the 24th inst., Mary J and on the 25th inst., James, children of Maj. Gen. Longstreet, Confederate States Army. The former aged 13 months, the latter 4 years and 6 days. The funeral will take place this afternoon at 3 o’clock, from the Arlington House.” An obituary notice for Augustus, who died one week later, never appeared in the Dispatch. A search for its publication in another Richmond newspaper goes for naught, since copies for winter 1862 are missing. Information or photos of the Arlington House is elusive. Only one other mention of it in the Dispatch during the fall 1861/winter 1862 is found. In the advertisement column, it states simply, “Arlington House located at the northeast corner of Main and 6th Streets.” In “General James Longstreet, the Confederacy’s most controversial soldier”, Jeffry Wert says “Louise and the children boarded with friends in the capital” during that time, but does not mention the Arlington.  No data on it is readily available from the Library of Virginia, or the Richmond Historical Society. The Arlington could seem more ghostly than real if not for diarist Mary Chesnut. The Chesnuts were good friends of Confederate President Jefferson Davis and his wife, Varina. Due to overcrowding they left the Spotswood Hotel, where the Davis’s temporarily lived, in favor of the Arlington House during August, 1861. Chesnut had high praise for her newest place of abode: “On the front steps every evening we take our seats and discourse at our pleasure. A nicer or more agreeable set of people were never assembled than our present Arlington crowd.” Were the Longstreet’s staying at or near the Arlington? Chesnut was away from Richmond during winter 1862, so doesn’t mention them. Nothing concerning Longstreet is reported in the Dispatch, nor is the epidemic that took his children’s lives even mentioned there, although its ravages seemed to have traveled as far north as Washington D.C. (A check of internet resources concerning the epidemic reveal the story of a Dr. Richard Stuart, who smuggled medical supplies from the Northern capital to the Confederacy. Stuart and his wife lost two of their children to the same scourge that claimed the Longstreet children’s lives.) If the Longstreet’s did not have the fortitude to attend their children’s funerals, what happened at the cemetery? From reading LaSalle Pickett’s words to Helen Longstreet, it would seem that the children were interred in Hollywood Cemetery ground during the winter when they died. However, it has since been discovered that the children’s bodies were placed in a vault owned by the John W. Davies family. Though it was supposed to be a temporary situation, the children remained there for eight years, along with numerous other bodies that awaited burial.  In April 1870 the president of the Hollywood Cemetery ordered all 29 unclaimed bodies in the Davies vault to be buried. During a check of records at the Hollywood Cemetery office, it was revealed that on June 29, 1870, James Longstreet purchased the lot where the children presently rest. The cost to him was $28, and his signature supposedly appears on the transaction. The children were interred at the site on August 18, 1870. Again referencing Wert, it can be seen that in 1870 James Longstreet held the position of surveyor of customs for the port of New Orleans, was appointed adjutant general of the state militia, and was named president of the newly organized New Orleans and Northeastern Railroad. The three positions earned him between ten and fifteen thousand dollars – “a very substantial sum for the times”, according to Wert. It can be surmised that with his comfortable earnings, if James paid for the burial plot, he also bought the headstone that marks the children’s grave. Whether or not James or Louise were present for the interment cannot be said at this point. The children’s grave can be found in the officer’s section of Hollywood Cemetery. It is located next to General John D. Imboden. The vault that served as a temporary repository for the children’s remains is still there, too. It is now the W.W. Pool vault. The structure is built into the side of a hill, and is adorned at its crown by a statue of a lamb.

Who Buried the Children? 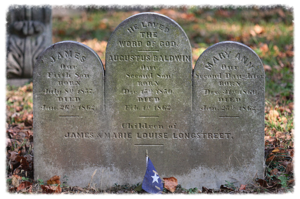